ma-trix: a situation or surrounding substance within which something else originates, develops or is contained. 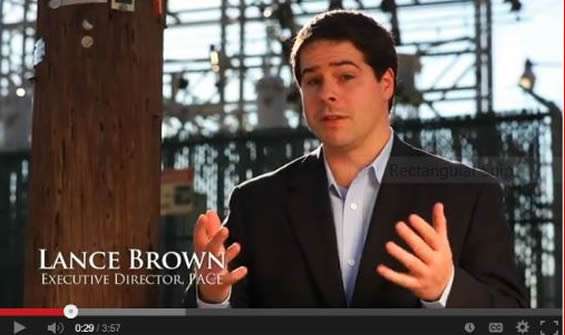 Lance Brown, the director and lone-employee of of the Montgomery-based non-profit, Partnership for Affordable Clean Energy, or PACE. PACE is essentially a subsidiary of Matrix LLC. That’s to say, a subsidiary of the controversial political consulting firm that counts Alabama Power among its biggest if not its biggest client.

Notes: Go Here for new development — a story about a non-profit that has given $279,000 to PACE and JobKeeper Alliance.

Also: A good treatment of PACE, its involvement with Matrix and Alabama Power is on part three of, “Mr. Dunn Goes to Montgomery.”

A host of records and Internet postings reveal that a non-profit that tirelessly boosts Alabama Power, before the Alabama Public Service Commission and elsewhere, is in effect a subsidiary of Matrix LLC, the Montgomery firm that’s provided political consulting services to the power company for some 20 years.

The Partnership for Affordable Energy — PACE, as it calls itself — has also been highly critical of PSC Commissioner Terry Dunn, the commissioner who has sought to lower Alabama Power’s rates.

PACE isn’t required to disclose where it gets its money. And if you ask its executive director/lone employee Lance Brown, he won’t tell you.

For now, this is what we know about PACE, or in any event, the highlights. 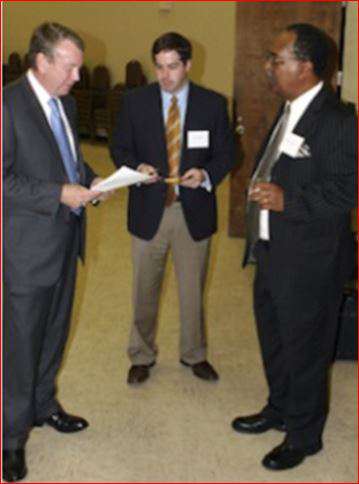 Out of focus though it is, this picture’s worth a 1,000 words. It was taken in 2009, at public forum in Tuskegee about energy policy. At left is Alabama Power executive Stephen Jones. In the middle, Lance Brown, executive director of PACE. And at right, Charles Steele, former state senator from Tuscaloosa and, then and now, head of the Atlanta-based Southern Christian Leadership Council, the Atlanta-based civil rights organization founded by Dr. Martin Luther King Jr.

Public records like the one above show that Brown was an employee of Matrix, not PACE, even as he held the supposedly full time job as PACE’s executive director. The records reflect that in 2009 he was drawing a salary of about $100,000 a year from Matrix.

In fact, PACE didn’t start paying Brown until 2011, the third year of its existence.

You may or may not find it surprising that Brown and PACE advocate, lock-step, the positions of Alabama Power and its Southern Company siblings. Twinkle Cavanaugh hung the moon, Terry Dunn stinks, etc.

Perkins and his firm — once called the Matrix Group, now, Matrix, LLC — specialize in gathering information on everyone and everything that matters or might matter to their corporate and political clientele.

The simple truth is that many people fear Perkins and Matrix. They don’t fear physical harm, of course, but rather, that information, whether true, false, or somewhere in between, might be publicly disseminated and twisted if they cross Matrix. The dissemination will be done in a way intended to conceal the involvement of Matrix and its clients.

Fliers alleging this or that awful act against an opponent of a Matrix client, sent in the name of an organization that doesn’t exist from an out of state P.O. Box that may well not even exist. That sort of thing.

PACE Fun Fact: As of March 30, Lance Brown has generated more than 6,200 tweets or re-tweets on Twitter.  That’s a lot of tweeting.

I recently examined, on this web-site, the role in the attacks on Terry Dunn by the Republican political consulting firm Swatek, Azbell, Howe & Ross. That report focuses on the firm’s relationship with House Speaker Mike Hubbard and the conservative site, Yellowhammer News. (Go Here for that.) Also noted were three of Swatek firm’s clients: Alabama Power; its parent, the Southern Company; and the related SouthernLINC Wireless.

Unlike that firm, Perkins and Matrix have long been associated with Democrats. For example, another of its major clients is the Alabama Education Association, which is the state teachers union, and for many years, if not still, the state employees union and its director, Mac McArthur.

Last year, Matrix and the Swatek firm worked on — and were paid hundreds of thousands of dollars each — the ad campaign to promote the jobs-funding measure Amendment Two. 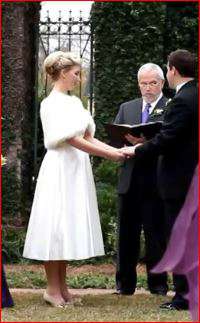 I only go to Montgomery occasionally, and every time am struck by the number of people who suspect they’re being taped or followed. I never hear such things in Mobile, or anywhere else for that matter. I don’t know that Matrix does such things, and am sure that there’s far less taping and tailing than the Montgomery political class suspects.

But Perkins and Matrix unquestionably contribute to the paranoia in Montgomery, and I believe that’s a bad thing for all Alabamians.

“I’d be scared to death.” —Perkins’ friend, Birmingham-Southern College politics professor and one time U.S. Senate candidate Natalie Davis, when asked how she’d feel to be opposite Perkins in a political campaign.

In 2001 I wrote a feature story on Perkins for the Mobile Press-Register, where I then worked. It was called, “The Matrix Man.” I consider it the best politics-related feature type story I ever wrote for the paper. Certainly it benefitted from having a fascinating subject in Perkins. I’ve been told by more than a few people that it’s considered the definitive piece on Perkins and Matrix. To read it, go here.

A few years ago, as part of my work on former Gov. Don Siegelman, I expanded, “The Matrix Man,” into chapter form. I intended to put it in my book on Siegelman but the book was too long and I didn’t use it. However, it can be read here.

Matrix’s web-site, in its totality. There is no other page on the site, nor any links. The company that prides itself on gathering information on others is extraordinarily protective about the nature of its services and the identities and contact information of its employees.

In March 2011, Birmingham News columnist John Archibald asked a power company spokesman about the company’s relationship with Matrix. The spokesman said that Matrix has provided strategy and policy advice to Alabama Power for many years. He declined to say how much Alabama Power pays the firm, or to provide anything in the way of details as to the specific nature of that work. 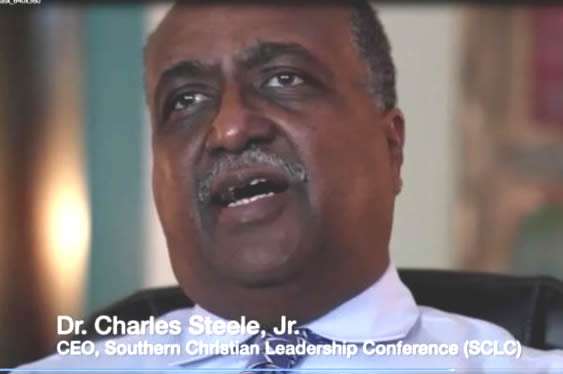 Charles Steele, in, “Behind the Mask,” a 17-minute film released in August by the Alabama Coal Association.  Steele, a former state senator from Tuscaloosa, is Alabama Power’s go-to guy for support in the African American community.

The theme of the “Behind the Mask” is that AARP, the League of Women Voters and Alabama Arise (the only group that lobbies for the poor in Alabama) are led by wealthy elitists with hidden environmental agendas. They’re pretending to go before the PSC to lower Alabama Power’s rates. But what they really want — or so asserts the film — is to serve their secret environmental agenda. They don’t want to lower your rates but, rather, to eliminate the use of coal in producing electricity.

“You must always know who you’re dealing with when your doing business. You must always know you are paying attention to and the background of these people.” —Charles Steele, from, “Behind the Mask.” He is, as you can see, identified as CEO of the Southern Christian Leadership Council. Not revealed are the hefty sums paid him by PACE, and which in all likelihood originated from Alabama Power.

Below: A portion of PACE’s publicly available tax return for 2009, showing the $102,909 paid that year to Steele; and, below that, a portion of the Southern Christian Leadership Conference’s tax return. As you can see, it shows Steele being paid a salary of $115,000 that year.

I will have more coming on Steele, but the main thing to know is this: There is no more energetic or more ever-present advocate for Alabama Power than Steele. He appears in videos, at public meetings, including before the Public Service Commission. To hear Steele tell it, Alabama Power hung the moon. He’s part of the public relations machinery that serves to prevent the lowering of power bills for the poor people he constantly claims to represent.

White, like Steele, appeared in, “Behind the Mask.” In the film, as at the PSC hearings, the Birmingham lawyer trumpeted the Alabama Power party line.

Seated to White’s left is Patrick Cagle, head of the JobKeeper Alliance. That’s another one-person entity, like PACE, that toots — and tweets — the same old Alabama Power song and dance.

Here’s Brown’s tweet after the PSC tweaked the method it will use to regulate Alabama Power’s rates. Cavanaugh publicly stated it would lead to reduced rates, only to have the company turn around and acknowledge that reductions were unlikely. In doing so, the company, if reluctantly, validated Dunn’s vote against the change.

Above, PACE’s Brown cheerleads for the Power Co. and Twinkle Cavanaugh, the power company’s high priestess at the PSC. She’s the anti-Dunn.

Brown, whose salary from PACE exceeded $150,000 in 2012, also tweets hard and heavy for Alabama Power’s sister company, Mississippi Power, as does JobKeeper’s Cagle. Sometimes their tweets for Alabama Power and Mississippi Power are so similar you’d swear they had the same Great and Powerful Oz tweeting them his very self. For example, here’s what Cagle and JobKeeper had to tweet after the Aug. 13 PSC vote. Word for word, as they say.

Brown lays into Terry Dunn on PACE’s web-site. I prefer to see it another way: That the game is up on PACE’s charade.

Note: The information on this page contains some but not all of the information related to PACE, Matrix and Alabama Power that’s in Part III of my documentary, “Mr. Dunn Goes to Montgomery.” Your better off watchingParts One and Two first, but if you want to go straight to Matrix, PACE, JobKeeper Alliance and more, click your little mouse and go watch, “The Pressure, and Those Applying It.” 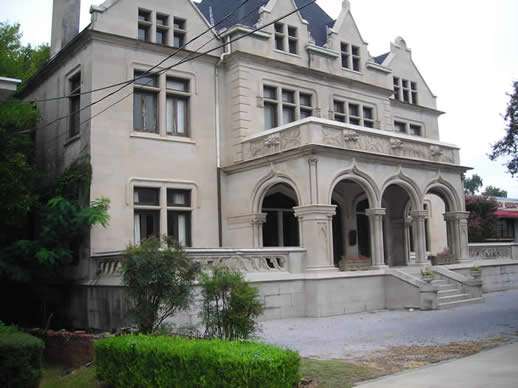 Matrix resides in this imposing building about a half-mile from the Alabama Statehouse. One friend laughingly described as looking like Hogwarts, from the Harry Potter tales. The firm also has an office in Birmingham.

PACE Fact: Though based in Montgomery, it was incorporated by a Birmingham-based lawyer with Balch & Bingham, the firm that represents Alabama Power.